This documentation aim to guide through the process of getting the ModbusBox connected to Ubidots.

ModbusBox is easy to use thanks to its embedded Web-UI accessible via Wi-Fi. When device is brand new or Wi-Fi hasn’t been set it can be configured as a access point mode (AP). Client mode is running all time after its connected to your local Wi-Fi network which make it very convenient for re- configure the device remotely while connected to your Local Wi-Fi network. ModbusBox is capable to read data registers from Modbus slaves^ and send data periodically to cloud or local IoT services using the very popular MQTT protocol. Data is serialized using JSON format, so it's very easy to parse the information on the IoT server. Slaves variables can be processed and displayed in Ubidots dashboards. Our ModbusBox has been focused primarily to be used with VFD (Variable Frequency Drive) but as I mention before it can be used with any device that handles Modbus RTU. One Key fact with ModbusBox its easy to use and deploy with Ubidots, no programming is required.

^ At this time the device allows a maximum of four slaves , but our next firmware release would have the option for up to six slaves.

^ If the slave type isn’t listed, you can edit the ModbusBox manifest file and add your own device 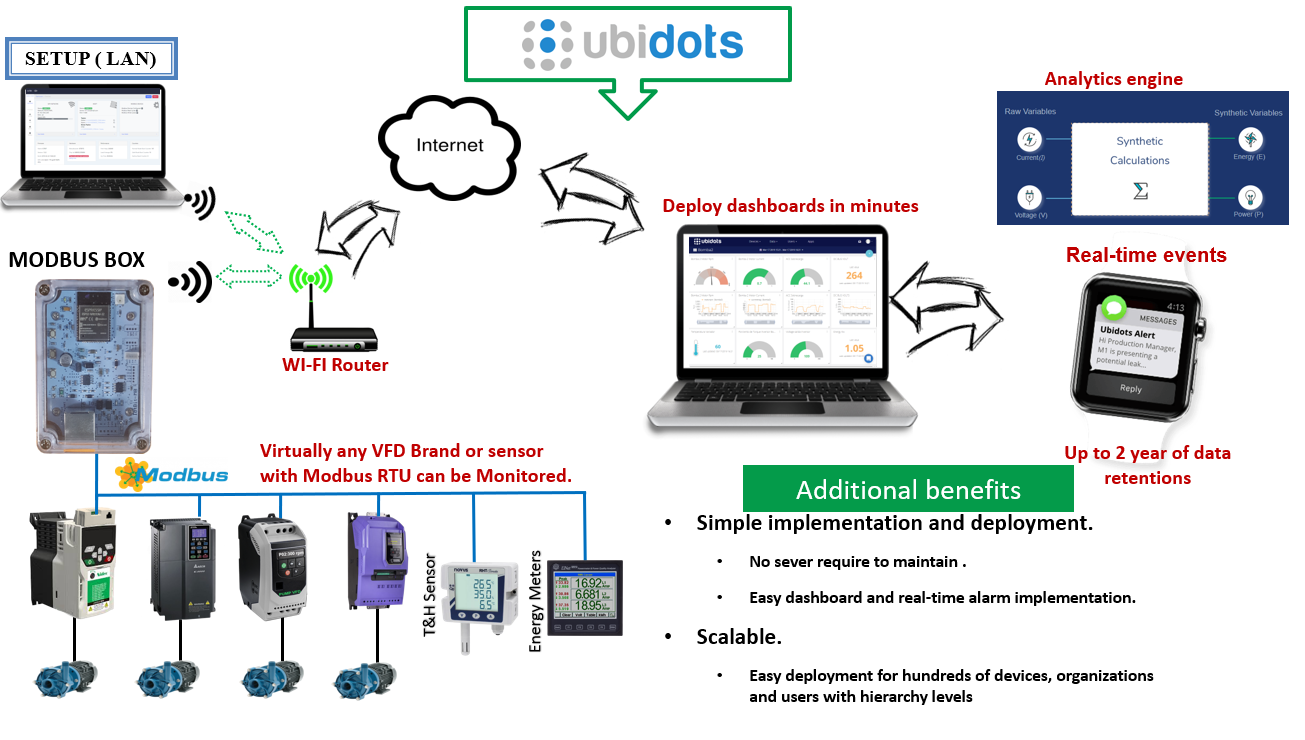 Please observe carefully the ModbusBox hardware, we recommend to print this section for a better understanding of any further explanation of the modbus usage and setup. 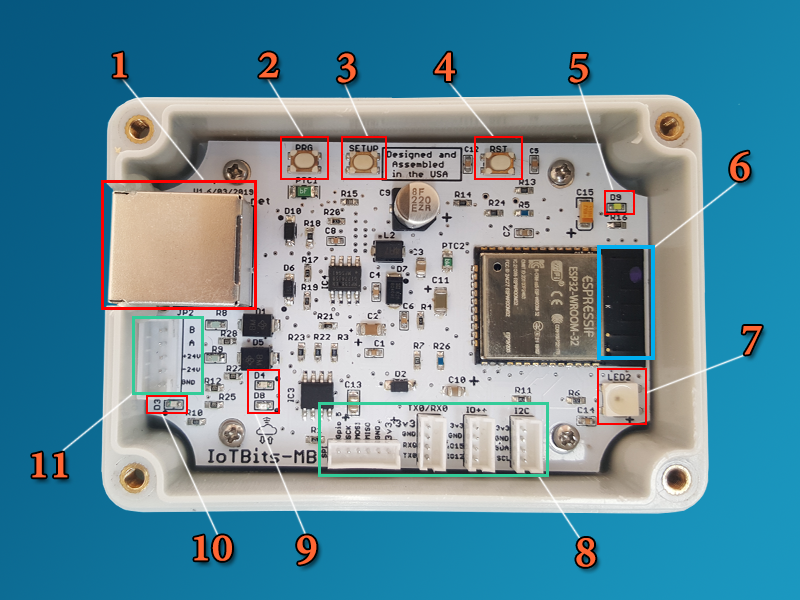 Both devices are identical from the hardware point of view. What makes them different is the the firmware variation inside the microcontroller. Model MB-B1W supports only one slave while MB-A4W supports up to four slaves, being able to read from all of them at the time.

Figure 3 shows the required wiring to connect ModbusBox to a cheap Eastron Energy meter. Please notice that in order to power the ModbusBox, a 12v - 24v DC power supply is required. 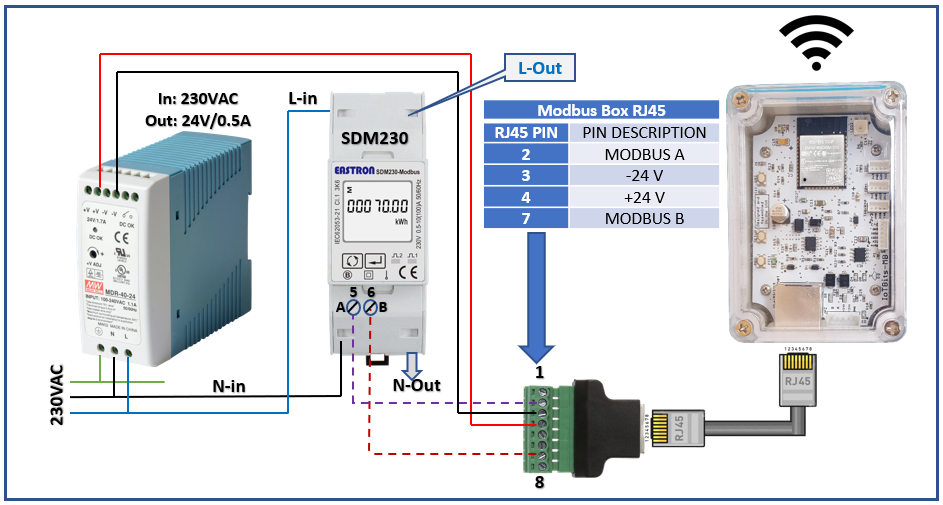 As you can see in Figure 4, there are three control buttons located on the PCB. These control buttons allows the user to switch between operation modes and to perform other advanced procedures.

When the ModbusBox is started with its factory configuration, there is no procedure required to enter in setup mode, in such scenario the device enters automatically in setup mode as soon it powers on. When in Setup Mode a Wi-Fi network search can take place in your Android/iOS mobile device or PC and look for SSID name MB-B1W or MB-A4W follow by other characters that represents the unique identification of the chip as shown bellow in Figure 5.

Setup Mode : Press and hold Setup button and then press and release Reset button while holding Setup button for 3 seconds or until status LED shown in Figure 2 change from fading pattern to fast green, then search Wi-Fi SSID name in your phone or PC as described previously.

Programing Mode : This mode is only for developers that get the ModbusBox without any firmware loaded on it and want to upload their own firmware. To enter into this mode, press and hold Programming button and quick press and release Reset button.

Factory Reset : To perform a factory reset, press and hold Setup button then quick press of Reset button, keeping pressed Setup button for about 10 seconds until status LED turns off and quick turn on back again with the LED fading in green color. After performing a factory reset, the ModbusBox enters automatically in Setup Mode and any previous configuration from the device is removed.

LEDs indicators on the device are very useful to quickly understand the operational status of the ModbusBox. They also helps to troubleshoot any problem with the device operation.

The Status LED, labeled as D2 on the PCB and marked with number 7 in Figure 2, is color dependent upon device statuses and alarms.

The following tables shows the color patterns of different statuses and alarms indications of the Status LED on the ModbusBox.

#3. Connecting ModbusBox to a Wi-Fi Network

Before going ahead with the next instructions make sure the ModbusBox is powered following the instruction on section 2.2 as is was previously described Setup Mode allows to do the following:

^ Not Covered in this tutorial

Power up ModbusBox with a suitable 12v -24v power supply following the indications on Figure 3. Make sure the Status LED is fading green 🟩, if it's not, probably ModbusBox had been setup before. If that's the case, proceed to press Setup Button while quickly press and Release reset button, wait 2 seconds until the Status LED starts fading green 🟩. 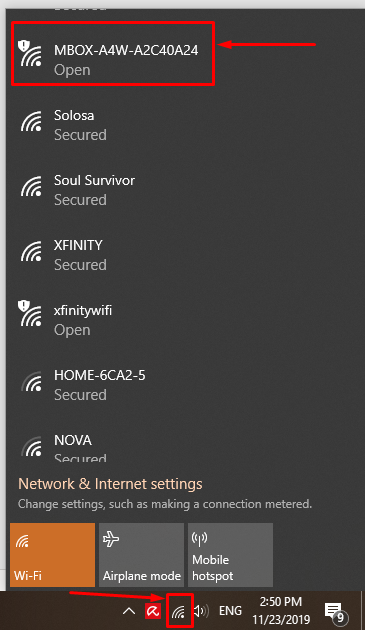 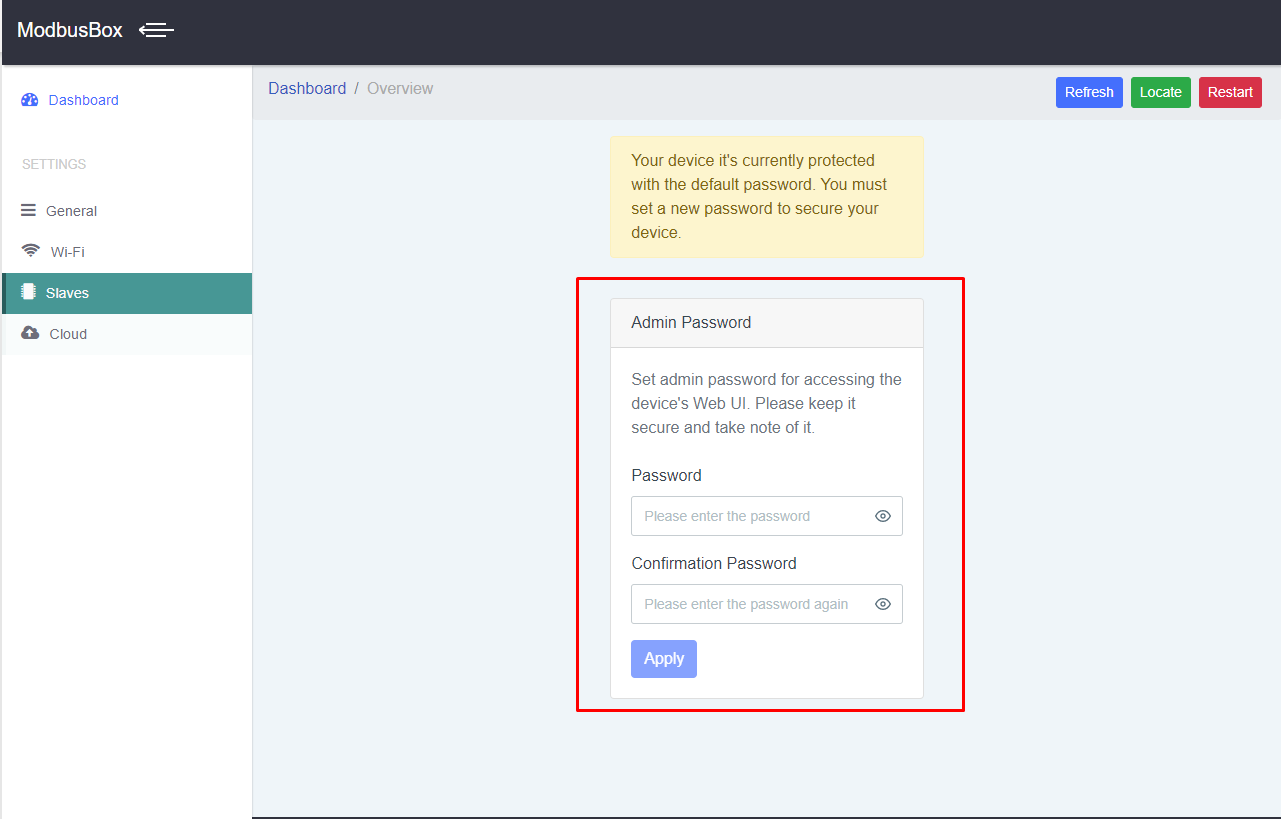 #Connecting ModbusBox to a Wi-Fi network 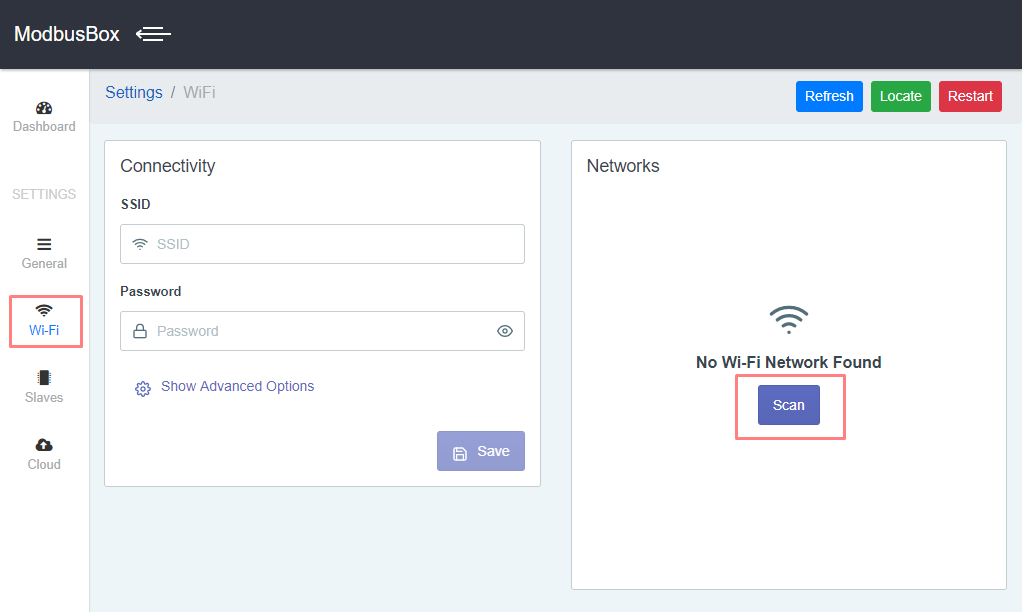 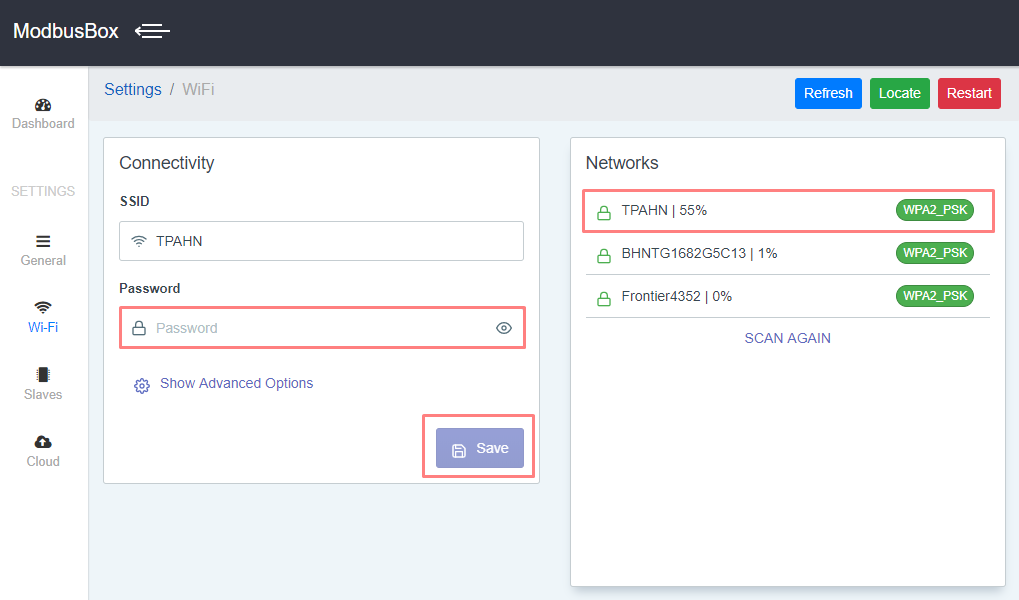 Please notice the indication of pending restart required, but you may continue without restarting since we need to set other options that will facilitate connecting to the ModbusBox after it is connected to the Wi-Fi that you have selected. 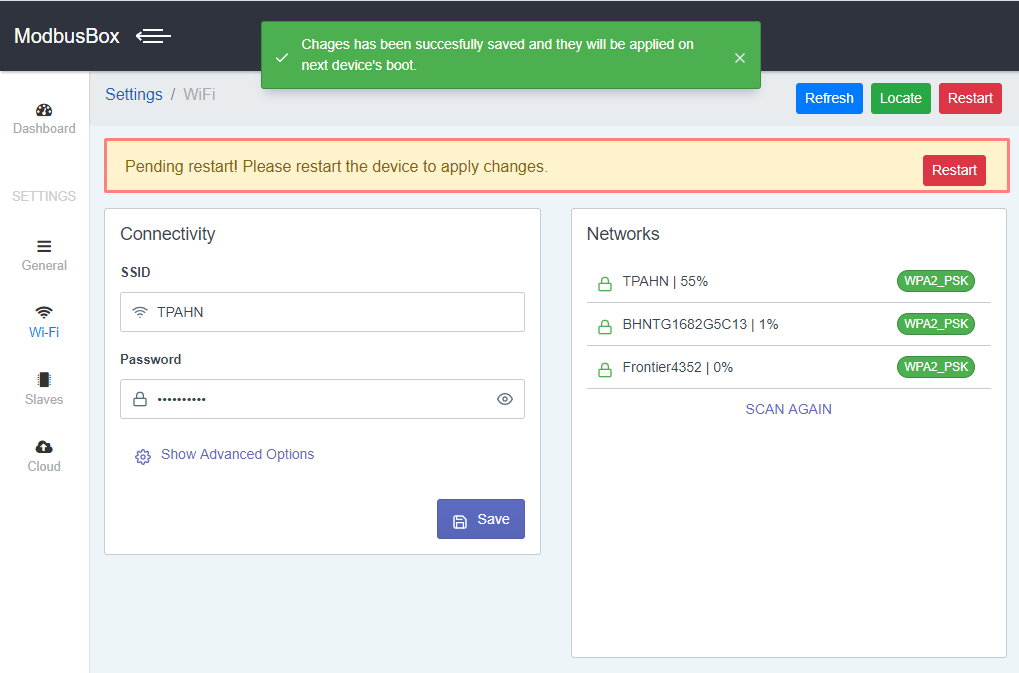 Let's move to the general configuration section by selecting the General tab on the vertical navbar.

This configuration section allows change the hostname, update the admin password and import/export settings and the manifest file.

At this time we will only change the device hostname to easily connect to the ModbusBox Web-UI once it connects to the Wi-Fi network and we wont know the assigned IP by the Wi-Fi router. 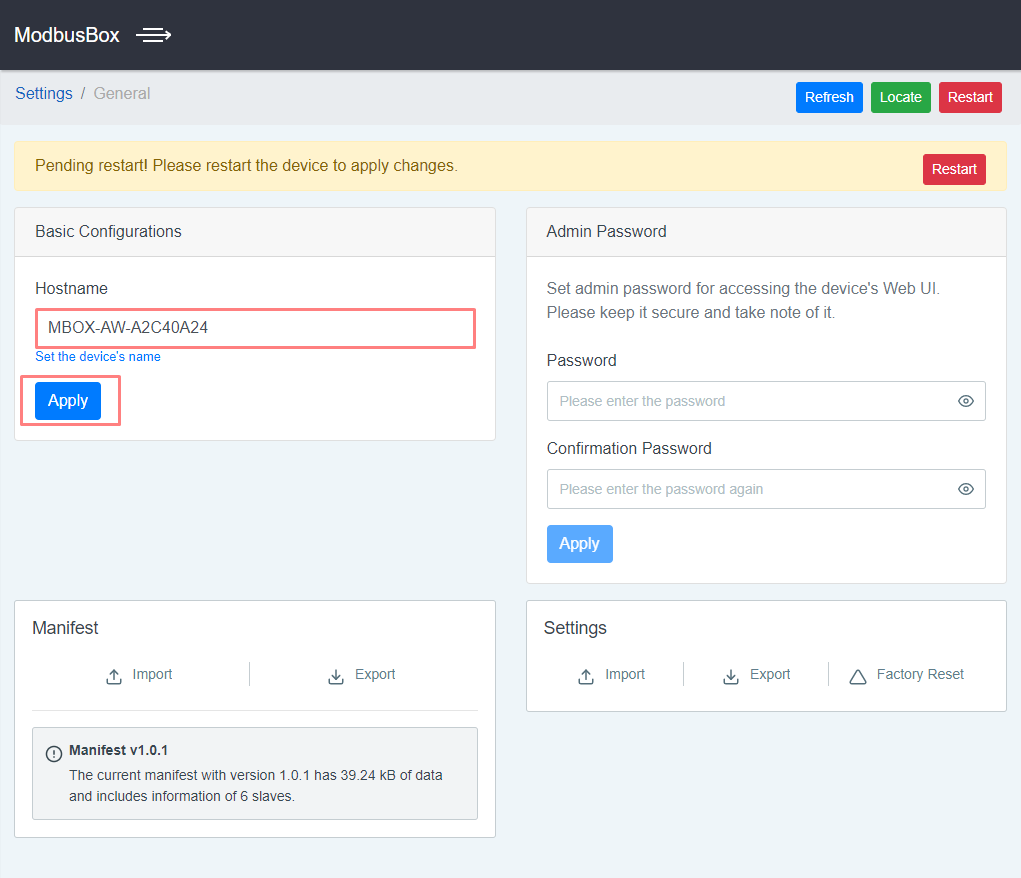 The next step to follow is adding modbus slaves and setup the cloud connectivity (MQTT). It’s perfectly possible to continue in Setup Mode to complete the entire setup, but at this point we prefer to just restart the ModbusBox and access the ModbusBox Web-UI via the IP assigned by the Wi-Fi router.

Click restart on the Web-UI or simple press reset button on the ModbusBox.

As previously commented, the following instructions are to complete the configuration of the ModbusBox that we didn’t finish during setup mode.

After resetting the device we would notice the Status LED is fading in a light blue color that is indication that is connected to Wi-Fi but isn’t connected to cloud service.

As you can see in Figure 10, we connect the ModbusBox to the Wi-Fi access point named "TPAHN", so we must connect the mobile device or computer to the same Wi-Fi network.

To easily access to the Web-UI just type in your browser the hostname that we set as shown in Figure 11.

A popup window will appear asking for the username and password. The username is always admin and the password that you set as shown in Figure 7. 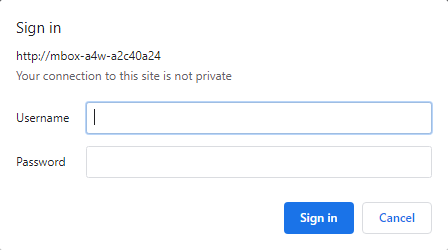 After successfully entered the credentials, you will be redirected to the dashboard. The dashboard contain useful information as shown below. 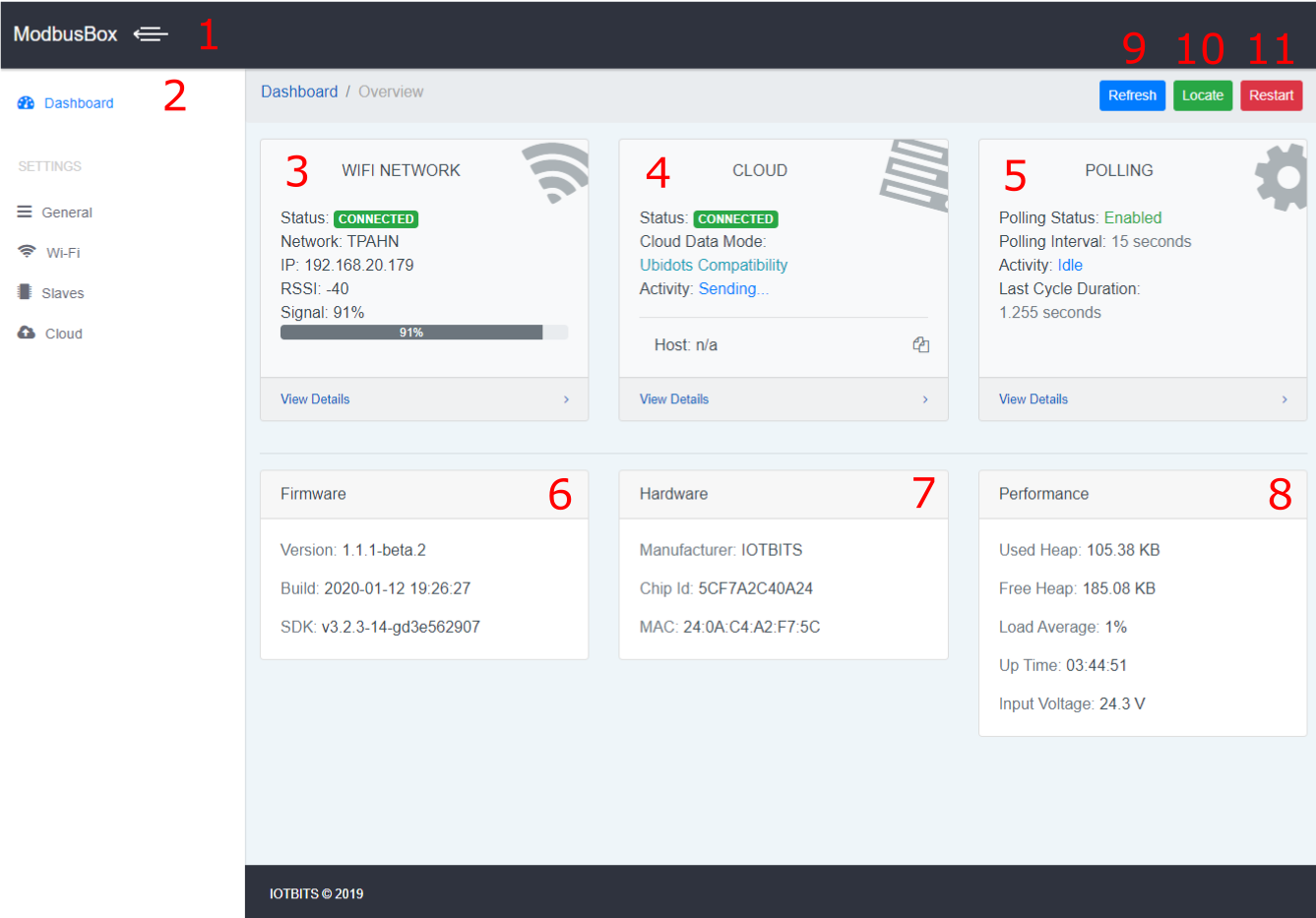 Let’s move now to the slave section, and click in add. 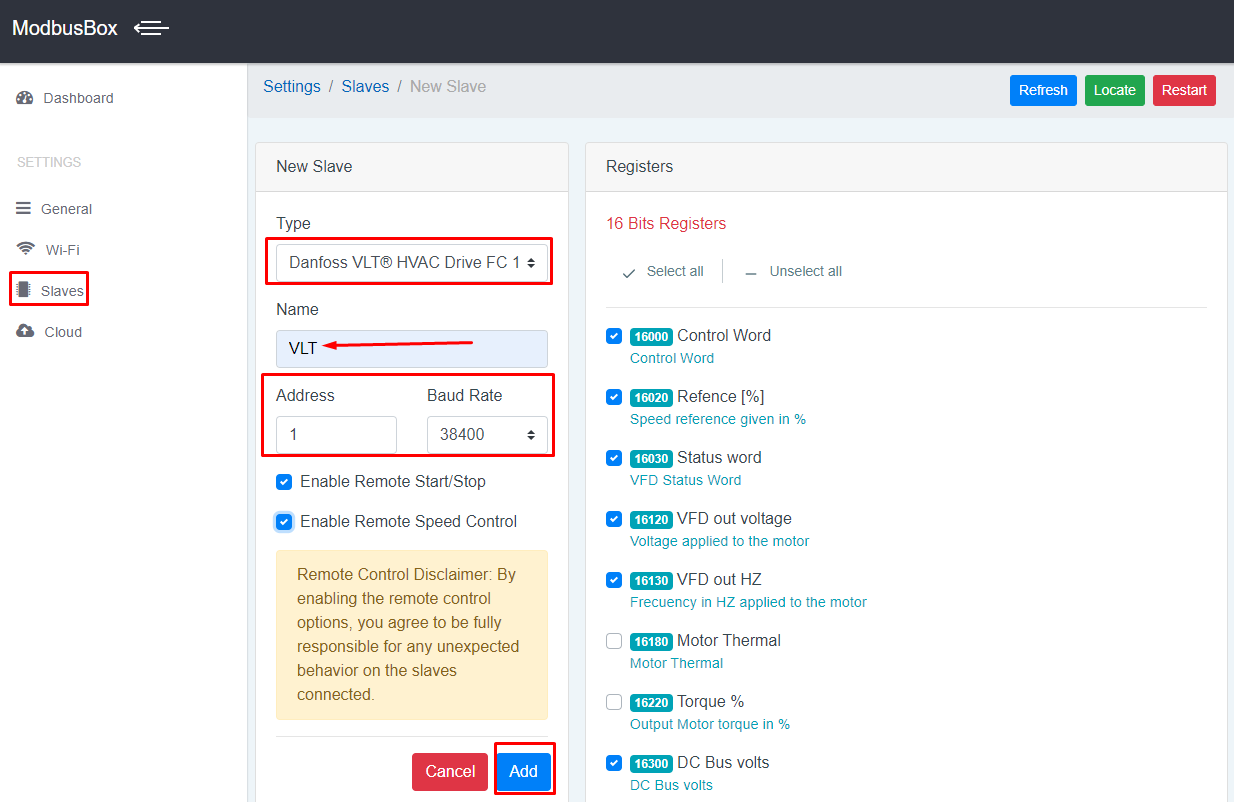 Now let’s setup the ModbusBox cloud section with the data of the Ubidots account.

Please make sure you set the parameters as follow: